At Propellernet all of our Digital PR team are involved with pitching out our stories to online media. We reckon that having all of the team on the front-line with pitching, with everyone from our interns to our Head of Department having that consistent interaction with digital reporters, means that we are all super knowledgeable about what kind of stories get a good response, a weak response and an awesome response! It makes the whole team really informed, and means that between us we have something like 60 years of combined pitching experience in the team!

We’ve been putting some questions out to the Digital PR Twittersphere to see how the general industry likes to pitch their stories to online media, and shared their responses below, with our own commentary and tips. Hopefully, you’ll find some reassurance – or learn something new – and it will make your pitching game as strong as possible.

1. What email pitching tactic is the most valuable?

Of the available answers, the majority of Digital-PRs voted follow-ups as the most valuable email pitching tactic. From my own experience, I’ve certainly found this to be the case (followed by being able to see how many times a journalist has opened an email and being able to schedule emails for time zones). I keep my follow-ups short and sweet; a simple case of ‘Hi, Just wondering if this was of interest?‘  I use them as a means to bring the story back to the top of a journo’s inbox – their inboxes are totally packed with press releases, and a quick follow up can help increase the chances of your release being seen and considered. However, don’t drown them in follow-ups, I do one follow-up two days after sending the initial pitch. Some people do more, some people offer new angles and release versions. Work out what you feel most comfortable with, be mindful of not making a journalist’s life harder, remember you only have their attention for a second or two, and track what follow-up format results in the most coverage for you.

Quick Tip Takeout: A short and simple follow-up email can help increase the chances of your press release being seen and considered by your journalist.

2. How long to leave it before following up on an email pitch?

The majority of Digital-PRs agree that two days is the sweet spot for a follow-up email. In this time you’ve allowed the journalist enough time to go through their inbox, and chances are if they haven’t noticed it after 48 hours, they aren’t going to! A chunk of Digital-PRs mix it up, sometimes doing follow-ups a bit sooner (although I’d recommend leaving at least 24 hours before sending a ‘did you see this story’ follow-up). 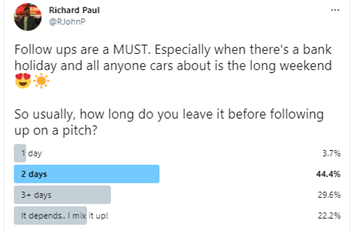 Quick Tip Takeout: Two days is the optimum time for following-up your original email pitch, but use your common sense – if your story is super timely or tied to an urgent news hook then follow-up quicker. If it’s a longer burn story, you can leave your follow-up for a few days.

3. Are journo relationships as important in link-building PR as they are offline?

Some of us SEO-PR old-timers remember when it was possible to get journalists on the phone and even arrange a lunch or coffee date with them. Nowadays, online reporters are so pressed for time that this kind of face-to-face meet-up is usually done on the journo’s own time, and so harder to secure! And is the effort to build relationships with key journos even worth it? For SEO-PR specifically, our specialism is making content and stories that secure links across as many domains as possible, for clients that cover a whole breadth of industries. Compared to off-line PRs, who typically have to specialise in a niche industry in order to achieve their KPIs, link-builder-PRs need a killer story with broad appeal. And in that instance – does having an existing relationship with a reporter carry any value? Or is time better spent finding new sites to pitch to?

The jury’s out on this one. In my humble opinion, compared to traditional pre-SEO-PR times, journo relationships aren’t as important as they once were, but that doesn’t mean they aren’t important at all. Time invested in finding new domains to pitch to, or new contacts to pitch to will probably result in more coverage and links than nursing a relationship with someone who barely has any time, HOWEVER, there are plus sides to knowing journalists on a more familiar basis – they may help give feedback on a story you’re struggling with, they can give you insights on what content and stories are hot and what’s not. But it’s a two-way thing, so make sure you are offering something valuable to journalists in return. Read my tips on building relationships with online reporters here).

Quick Tip Takeout: If your story is strong enough and relevant enough, you can secure great coverage without having a pre-existing relationship with your journalist.

4. Should you ask if the journalist you’re emailing is well?

This question was prompted by one journalist tweeting that they categorically hate being asked by PRs if they ‘are well’ in email pitches. They argued that that was something you only ask someone you already know. Other journalists weighed in, as did PR professionals, with people from both sides arguing for and against the tweet. We asked the Digital-PR Twitter crew specifically which side of the fence they fell on. 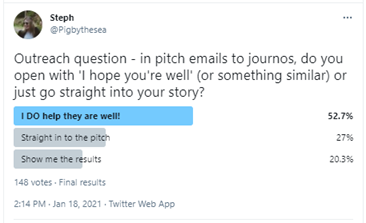 Many of us in the team say something like ‘I hope you’re well’ in pitch emails, and it is a genuine good wish rather than an obligatory greeting. Others, myself included, don’t include it and go straight to the story. There’s no right or wrong way. However, I would recommend keeping pleasantries to an absolute minimum – remember online reporters are so tight on time that it’s more annoying than flattering to wade through a long personalised intro, however well-intentioned it is.

Quick Tip Takeout: It’s up to you about asking if a journalist is well; what’s most important in an email intro is giving the key details of your story, including if or where the journalist can find supporting images, comments or more data.

5. Is it OK to just email the press release with no intro email?

We’ve established that pleasantries should be kept to a minimum, so is there actually any point in sending an intro email, or does it work just as well to send the press release without any sort of introduction? Our PR Director Richard Paul asked Digital-PRs for their view on the matter, and the results were a mixed bag. 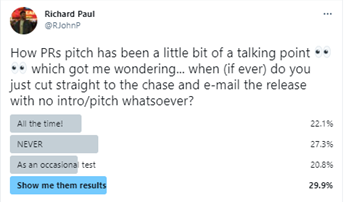 The slight majority say ‘never’ send a press release without an introduction, but nearly as many say they do it all the time, and the rest sit in the ‘sometimes’ camp. For me, I’ve secured coverage both ways, sending a release with an intro and without one;  it depends on the type of story and who you are pitching it to. For example, I think sending a press release with no intro to a Newsdesk or general contact email address (i.e. a contact/info/[email protected]) is perfectly reasonable. If the story is really strong and bangs on the journalist’s beat then you could get away without an intro. But if the story is on a very specialist topic, or you’re pitching to an individual journalist that you’ve not pitched to before, then the intro can make a big difference.

Quick Tip Takeout: Blasting a press release with no intro can work for newsdesks and general contact email addresses, but give a nice contextual intro when pitching to individuals.

6. Finally, what time of day is most successful for sending an email pitch?

Pre-8am is a very busy time (as everyone wants to get the journalist’s attention) so consider what other times a journalist might be looking at emails, for example, may be in the quieter lunchtime period when other PRs have taken a break, or late in the afternoon. It could be that the journalist has a set time in their day when they browse releases so it doesn’t matter when you pitch as they’re only going to view it in that slot anyway.

Quick Tip Takeout: Pitching pre-8am isn’t as important as it used to be a few years ago; however it still seems to be most people’s best time for open rates and securing coverage!

Interested in Digital PR and what it could offer for your brand, drop us a line at [email protected] to speak to the team. 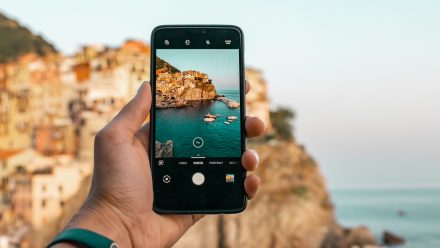 Analysis: Is it all over for the most Instagrammed Digital PR campaign? 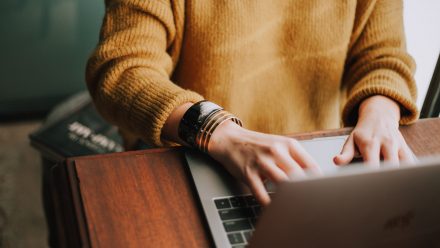